“What you need is a few sunflowers,” suggested the goldenrod authority. He was circling the meadow in fading light as evening was settling in. He had observed that I had nothing but the usual goldenrod, but to my great disappointment he would not name them. I was hoping for an authoritative identification of the few species that populate the field.

Sunflowers were not on my radar. The only native sunflower I know prefers woodland of which I have almost none. But scanning the meadow bursting with goldenrod I decided what I want is more asters like these New York asters that grow near the bog. 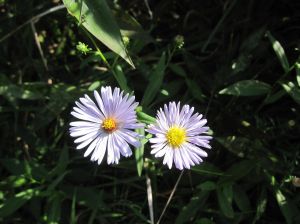 The goldenrod authority was also a house guest, and notwithstanding the sunflower suggestion, brought an aster as a gift. I planted his aster on Monday but it looked lonely. Wednesday bought 6 more: Rhody Native asters ( 3 A. novi-belgii and 3 A. undulatus) from Blue Moon Nursery. Emily planted them at the edge of meadow between “Susan’s folly” and the veggie garden. These seven asters have their work cut out to begin to balance the resurgence of goldenrod where Bittersweet used to dominate.

A year ago, I could not have imagined that I would have a field yellowed with Goldenrod today. It seems that where I disturbed the ground in pulling Bittersweet, Goldernrod seeded. 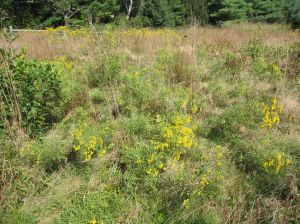 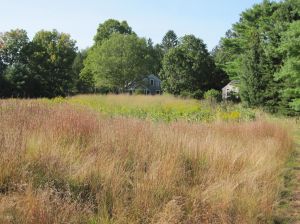 Goldenrod filling in where Bittersweet used to rule