Was it poetic license or did lilacs bloom by 14 April in 1865? Lilacs may well bloom by mid April in Washington DC where Lincoln was assassinated on that day and where Walt Whitman may have been living. (I think of Whitman as a New Yorker but he worked, I’ve learned, in DC until at least June 1865.) But the lilacs in my New England dooryard are still weeks away from blooming which makes using Whitman’s poem, When lilacs last in the dooryard bloom’d, as a mnemonic device for Lincoln’s death imprecise. For the record, I read Marc Anthony’s “I come not to praise Caesar, but to bury him” soliloquy on the Ides of March and most years I remember Kennedy’s assassination on 22 November — both sufficiently outside the blooming season to come to mind without a flower.

Lilacs in my dooryard budding…

The observation of bloom dates has new importance to me since I have pushed the Rhode Island Wild Plant Society to participate starting this year in citizen science projects related to plant phenology. That lead to my discovery of Richard Primack, a professor of biology at Boston University, who together with colleagues has used Thoreau’s observations of plant pheno phases as recorded in Walden MA to determine that some plants are blooming earlier now than they did in the mid 19th century. Reading Primack’s recent book, Walden Warming: Climate Change comes to Thoreau’s Woods, is also part of my extended practice of remaining horizontal while my foot recovers from surgery.

Lilacs, whether they bloom in April or May, are icons of spring. Elliot used them in The Waste Land (“April is the cruelest month, breeding Lilacs out of the dead land…”), Shakespeare doesn’t mention the lilac but they had just been imported to Europe at the end of the 16th century. In that way that olfactory memories can be so emphatic (the olfactory bulb is part of the limbic system with easy access to the amygdala which plays a role in emotional memories as countless newspaper articles report). I do not smell a lilac without remembering a hedgerow of them, now plowed under in Princeton University’s relentless march to build, between Baker Rink (which must be too solid to tear down) and the tennis courts (gone like the lilacs) where I’d go in the spring just to inhale lilac perfume.

Of Walden’s three spring harbingers, the other two — the drooping arc in the Western night sky of Venus and the warbling song of a Hermit thrush — don’t come close to embodying the nostalgia of the lilac. Whitman may have taken license with the blooming date of lilacs, and maybe he wasn’t a birder. The thrush winters over along the Eastern seaboard as far north as Rhode Island so hearing a thrush does not signal spring to me. Maybe that’s why Whitman leads with the lilac. No matter the seasonal veracity, the first few lines of his poem are enough to connect my April budding lilacs to Lincoln’s assassination for an annual memorial. And I’ll try to report to the correct date on which my lilacs bloom to the citizen science project.

Actually, thanks to Google, I found several measurements for this tiniest state. One figure was 1,044. Another 1,021. This is a state that changes size twice a day with the tides. Still, you’d think the mean tide line would be used in square footage calculations and that that could be a know line in the sand. 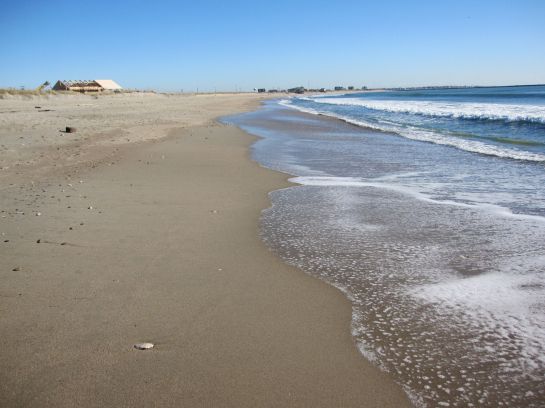 I am interested in the size of RI not only to see how tiny my holding is but also because I have designed a theme for the RI Wild Plant Society’s 25th anniversary, which is this year. I don’t know how much impact it will have, but with the square mileage numbers, we can sum even tiny efforts to see how large a state-wide garden we actually make in 2012 and beyond.

I’m also going to look into how many acres of farm land are decommissioned each year. Then there’s the matter of how much of the state is forest. Again the percentage varies by publication, but it may be around 40 percent. I hope to post of my simple arithmetic over time.

“This year, in celebration of the anniversary and to increase the number of Rhode Island landscapes flourishing with natives, we’ve planned a simple challenge: if each and every Society member will convert some plot of land from non-native plantings to natives, we will draw attention to the beauty and the utility of native plants and take steps toward creating a state-wide native garden.  After all, RIWPS members live from Woonsocket to New Shoreham and from Westerly to Little Compton to Gloucester. No one’s plot is an island. We can make a native garden, starting this year, unheeded by county boundaries, mean tide lines or stone walls, as big and wide as Little Rhody.

Here are a few ideas using 25 as the challenge point. Really, the list of possibilities is endless, as are the multiples of 25: