This post was supposed to be upbeat detailing all the remarkable forms of help the vegetable garden has had this year making it the best ever. That view is apparently shared by an afternoon marauder. 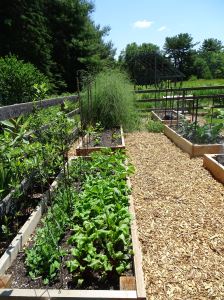 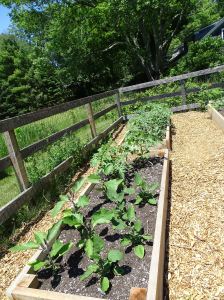 In preparation for writing, I took photos this afternoon. But first to show the garden in all its glory I removed the makeshift covers over a couple of areas where someone has been nibbling on the tender leaves — notably on the Patty Pan squash and four little lettuce plants (not in any of the afternoon photos).

This evening I went out to recover the plants. To my horror, the squash, those 4 lettuces and also the kale had been chomped to within a stem of their lives. In broad daylight! In the space of a few hours! You’ll be able to compare the landscape views of the garden with the close-ups of the decimated plants, if you have the stomach as it were. 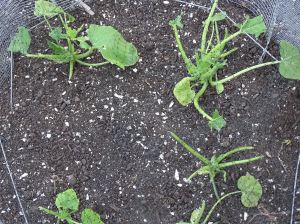 All that’s left of the 4 little lettuces

Linda is coming on Tuesday and I had planned to harvest some of the kale (she complains but eats what she calls my sticks and twigs diet). Ah, if only I had done that after the photos! Ah if only I had covered the squash and the lettuce back up! It’s early in the season for such regrets. Maybe it’s also early enough for the plants to recover.

But back to the intended post. This year’s garden has brand new, made-to-order, cedar boxes for the raised beds. Those beds have some 3 cubic yards of new raised bed garden soil from Earth Care Farm — the gold standard around here. In between the beds we have new oak wood chips dropped off by Wallace Tree Service, my tree guys as it were. Then Emily has been planting both seedlings and seeds; she’s spent several years managing Casey Farm.

Finally, Scott has added additional fencing to those boxes most popular with the marauder. I sprayed the wood of the boxes with Deer Out but we had a lot of rain since then. I’ll do that again tomorrow, although maybe it doesn’t work for rabbits or groundhogs. I have had good luck with it with the deer.

Add all that help to the wet spring and I have the best vegetable garden ever — for me. Really for me and my marauder.