Today is the Spring Equinox of 2021. But, really, this post is a summary of the last season in photos since it is so overdue. The global pandemic kept me grounded which meant I and others did lots more clearing last spring of unwanted plants in the meadow. Ryan and Emily cleared truckload after truckload …

END_OF_DOCUMENT_TOKEN_TO_BE_REPLACED

Since I can’t manage to mount a little hunting camera I bought over a year ago, I have to use fresh snow to record traffic through the yard at night. It works pretty well when the tracks clearly resemble the mud prints in the Animal Tracks of New England book I use, and when I apply Occam’s razor.

We nearly got through the winter without snow, but on 13 February, we had enough to find tracks. 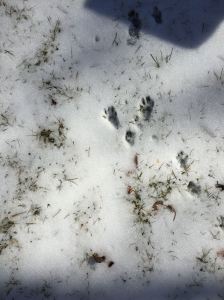 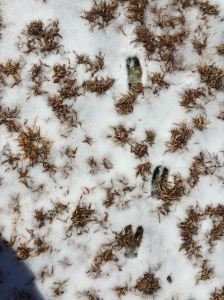 See the clear tracks of a raccoon and deer in the photos.

The raccoon tracks appeared around the house before heading into the field; the deer tracks were down at the bottom of the field near the blueberry bushes.

Deer tracks, of course, are unmistakable, but I was also catching sightings of a family of three deer nearer the house and even in daylight. They would hang out grazing in the early morning beyond the guest house and around the compost pile before cutting across the field.

I got a photo of each of them but only post two. Not wanting the area around the guest house to become part of their regular route, I sprayed there with Deer Out. That seems to have worked well. I have not seen them there or anywhere of late. 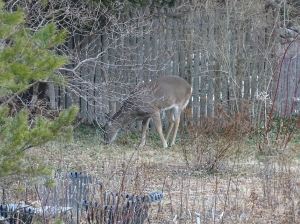 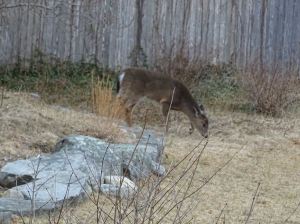 On 28 February we had more snow. Before I could get out to check for new tracks, I saw what looked like a fisher cat or maybe a mink. He came out of the woods by the pond at the bottom of the field. I grabbed my bins for a closer look and, after a safe interval of time, my boots and camera. This snow was very wet and I did not get a good impression. I also could not match the footprint to either fisher or mink. For one thing, the impression this animal left was smaller. 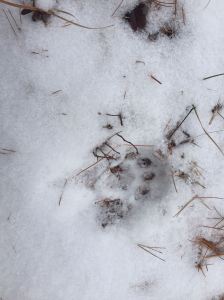 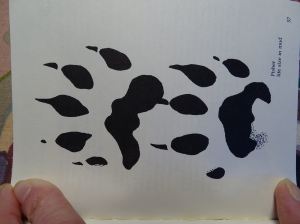 Fisher in mud from Animal Tracks

Mid afternoon today, 17 March, I looked out the kitchen window and saw what I realized was the same animal. But this was Oscar, the neighbor’s cat. He not been around for months maybe because his master and mistress have put their house on the market and even, I thought, moved away. Certainly Oscar had retreated from my concerns. Yet today there was no denying that Oscar was back. I could see his white paws even if I could not see his white bib. And yes, he must have been my fisher or mink. Think horses, not zebras.

Just this afternoon I caught a glimpse of an Eastern bluebird and his mate. When they are here in March, there is a chance that they have chosen one of my bird houses as a nesting spot. But they were in the part of the field that Oscar had just been prowling. Please find a buyer for Oscar’s house! The bluebirds join me in this fervent hope. 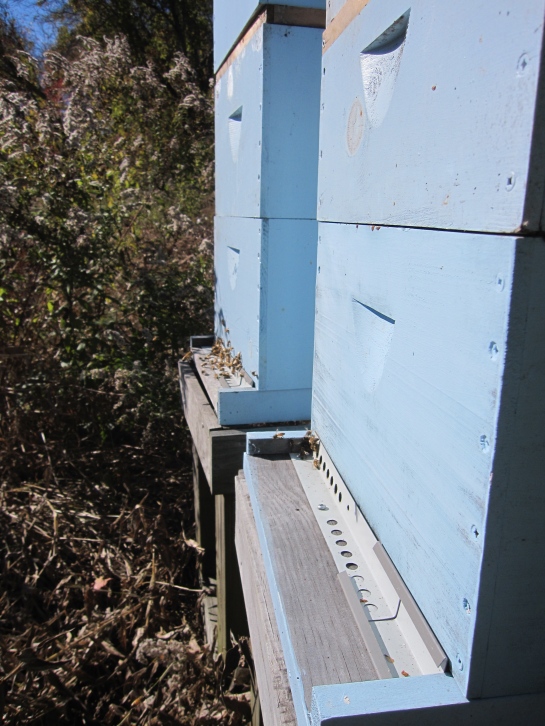 Disaster — in the form of weak hives invaded by wax moths — awaited, I was certain. So certain that I called in a veteran beekeeper to help me open my hives. True, bees were flying in and out of both hives but this summer challenged my sub par beekeeping skills more than ever. First, …

END_OF_DOCUMENT_TOKEN_TO_BE_REPLACED

No photos today. They would be more gruesome than the ones yesterday. A carrion-eating creature came back last night, dragged the fawn carcass to a new spot, removed the front legs and eat most of the head.

To lighten up this post, I borrow a caption for the title from a Gary Lawson Far Side cartoon that once tickled my children’s fancy and remained a family giggle.

Another carrion-eater torn a big hole in a garbage bag to help himself to the wax moth larva and pollen debris from the bottom board of an out-of-commission beehive. I’d planned to keep that mess until the state bee inspector stops by later this week. Not that he’ll be interested; there is nothing noteworthy about it. But, should our conversation lag. I thought I’d whip it out for show-and-tell.

Tomorrow I’ll report on the annual feeding frenzy of the dragonflies and show you the remaining bee hives in action. The bees from the two strong hives robbed the much-swarmed hive of its honey so I have nothing to harvest for my oatmeal this winter. The bees, however, will have plenty for their oatmeal. Da always said: feed the animals first.

The meadow is keeping wildlife of all stripes well fed. 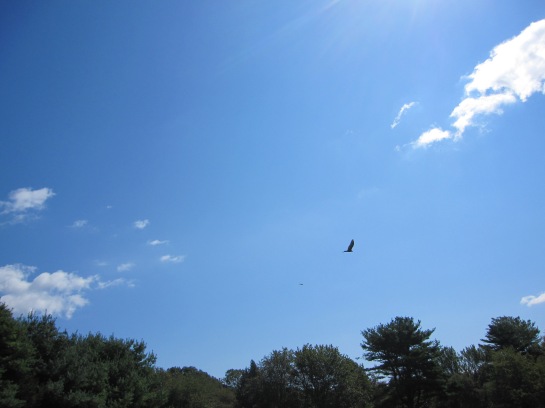 First three now six Turkey vultures are lunching on a fawn carcass in the lawn beyond the meadow. I did not hear the kill, which must have happened last night. The killer had to be big suggesting coyote, but I have not heard any of late. Then again, my night time hearing might be aging …