It was snowing as I returned in early April from a month in NYC. I guess it can’t rain at 22 degrees F. The spinach seeds I had planted in a few warm days of early March before leaving for the city in the anticipation that they would be ready to harvest upon my return, germinated, grew and froze. The lettuce seeds did not even bother to germinate. Only the peas survived that experiment in jumping the gun: they germinated but only now are they finally starting to grow.

By the second week of April, night time temperatures were hovering around but above freezing. Precipitation fell then as rain. On 7 April, notwithstanding the rain, I needed my sunglasses to look out the kitchen window at the grass it was so intensely green. My little bit of Ireland. The grass greened up early but it has been slow to grow. The rabbits have been the only lawn mowers needed to date. I seem to have two rabbits at present. How long can that last? 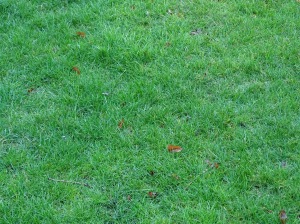 Maybe the photo does not capture the intensity of the green

The first-of-year (FOY) chipmunk appeared before Emancipation Day. The lilacs in the dooryard were again not  close to blooming that day, though the branches did have buds. Even today, at the start of May, blooming lilacs are a full two weeks away. Whitman and I following different blooming calendars.

I expect peonies to bloom by Memorial Day but that’s because I grew up in more southerly places, Here I can report that the ruby red shoots have emerged. Likewise, the first asparagus spears have finally appeared. I must be confused, but I thought I was already getting sick of asparagus by this time last year. The first rhubarb leaves are moving from red to green. The sage made it through the winter and one of the two tarragon bushes did as well. Along the road side of the stone wall where three years ago Emily planted four types of daffodils, only one type seems to be blooming — and it started after all the daffodils in other parts of the yard have finished.

The blueberries, both low and high bush, appear to have liked the winter if that’s what setting lots of fruit buds means. I was tardy in pruning them, but spring is arriving slowly as well.

On 18 April, I saw a gigantic bird in the folly. A Harpy eagle, I thought, as I raced to get my bins. By the time I had the bird in focus, it had become a turkey. She was doing what I love to do when the weather warms up: sitting, well, she was standing, on the bench in the folly taking in the late afternoon sun and observing the meadow. The hen has been around frequently since then, although I have not seen her again in the folly.

Other FOY birds include a male Ruby-throated hummingbird who came to the nectar feeder on 25 April. A male Eastern towhee was feeding on the ground under the front feeder on 27 April. “Oh Sam Peabody, Peabody, Peabody” (the White-throated sparrows) have been highly conversational of late, though their numbers seem to be declining suggesting they have started flying north.

All four pairs of Northern cardinals are in residence. Can they be the very same birds who have been here for several years? One of the males is distinctly more orange in his plumage than red just as in past years.

For the record, the Cabbage white butterfly arrived mid April.

Perhaps to make up for a dry April, the onset of May was raw and rainy. Spring seems slow to bloom this year.

Disaster — in the form of weak hives invaded by wax moths — awaited, I was certain. So certain that I called in a veteran beekeeper to help me open my hives. True, bees were flying in and out of both hives but this summer challenged my sub par beekeeping skills more than ever. First, …

END_OF_DOCUMENT_TOKEN_TO_BE_REPLACED

The newspaper coverings I taped to the living room windows blew off yesterday. (I drafted this post on 13 May!) The American Robin is again flying at its reflection upsetting the peace of the house and, I have to believe, reducing its chances to be selected as a mate. Maybe this Robin already knows he has been overlooked, and depression at rejection is driving this behavior. If he doesn’t have a headache, I do.

Tree Swallows are nesting for about the 4th year in the box closest to the vegetable garden. The couple successfully defended their home from a third Swallow, who after buzzing the box for an entire afternoon, gave up and went away. Perhaps that third bird was taking out his aggression on the mated pair because his intended lay dead in a box across the meadow. The eyes of the Tree Swallow had been pecked out suggesting the role of a House sparrow in its demise. House Sparrows are building a nest in a neighboring box.

Dead Tree Swallow on top of box where it died

In 2010, Gary, the carpenter working on my house, reduced the opening of the box to suit Bluebirds. Bluebirds dutifully came to build a nest only to be chased away by House Sparrows who then chipped away at Gary’s new door until it was large enough for them to enter the box. House Sparrows nested there that year laying round after round of eggs that I kept removing. However, after a generally successful campaign against House Sparrows, none appeared again until this year. The box they have chosen is the box with the altered doorway. There are now 5 eggs in the nest.

A pair of Easter Phoebes hopped around on the eave beside the open porch area. They were measuring, I was pretty sure, for nest building. Then I did not see them again until I went out to the folly where a Phoebe nest was tucked into a narrow space between the roof trusses and the back of a photovoltaic panel. Had they used the porch eave, I might have been able to see inside the nest. In the folly, I can only see the characteristic signs of Phoebe nest — brushy material held together with mud like hair falling from a french twist.

A pair of Wild Turkeys have made themselves at home here of late. First I thought it strange that there was only one Turkey. A couple of days ago, two Turkeys were here together. They are fairly unperturbed by humans. Their feathers have the sheen of armor until they shake making them look like dust mops. See the video, if you’d like.

The Ruby-throated Hummingbirds are back and so are the Baltimore Orioles. The Hummingbirds drink sugar water and the Orioles eat the oranges I put out in suet cages. The biggest snackers at this time of year are the Grackles. They’d eat 2 patties of suet a day if I’d put it out. But feeding Grackles is not my idea of attracting interesting birds so I leave the suet feeders empty every other day and feel badly about the Woodpeckers, the Cardinals, the Titmice and the Jays who would also like the suet but eat more moderately.

For the record, I have 4 pairs of Northern Cardinals this year. Two males were dive bombing a Blue Jay who must have his eyes on the eggs in a Cardinal nest. I guess that’s a reason to keep the suet feeder stocked.

Finally in the bird update, a solitary Canada Goose seemed to have been left behind by other Geese who fly in lazy formations while squawking across the meadow. After about a week of watching this bird hang out in a tightly circumspect patch of the meadow where the bee yard will go once the bees return, I came to think of this as MY Canada Goose. For one who comes by a strong dislike for the species genetically, this seemed a marked softening of heart. My Canada Goose took no interest in the Geese flying overhead. I thought that showed acceptance of  my bird’s predicament. I developed theories about that predicament: injured, jilted, otherwise defective. It must not have been so injured that it could not fly into a tree to roost at night. It showed admirable good sense not to sleep on the ground in the meadow.

The Canada Goose and I had this routine of what I presumed to be mutual observation down to a science so imagine my surprise when this morning (still 13 May) I saw the Goose with a mate and two ducklings. My camera can’t reach the far side of the meadow so the evidence of the Goose is displayed in its poops on the weed block for the bee yard.