Back in the days of extensive house renovations, my family elected a piece of equipment for an exemplary service award each week. The shop vac was a frequent winner. We’d come home from work and school to find, despite all precautions by the crew, a layer of dust that required removal by the shop vac before we could comfortably settle in.

I don’t miss the renovations, but I miss the award practice. Although it’s an exchange with an inanimate object, the awardee benefits — in my experience — from the act of appreciation.

I want to give a lifetime award to my swimming fins.

Claudia somebody, a colleague at the World Bank not known to me to be a swimmer, insisted that I order a certain pair of fins — not the regular, flexible swimming fins but a type more commonly used by divers. She also had me buy a 10-pound weight to put on my kick board. Using both in my swimming routine would help me get a better workout, she argued. That was 1994. The weight did not make the cut as I pared down to move into retirement in 2009, but the fins were too integral to my swim routine to eliminate in this passage of aging.

In May 2016, when the fins were 22 years old, the adjustable heel strap on the right fin had frayed to the point where it threatened to let go on any kick. I had already doctored the casing that prevents the webbing from rubbing against my heel with black electricians tape. Now the needed repair would involve replacing the swiveling pin that holds the strap to the fin — not a Sally homemaker task.

From a magazine file with my most precious documents, I retrieved the literature I’d carefully saved on the fins. The person who answered the phone in Santa Barbara — without the intermediation of a receptionist or a message about listening carefully as our options have changed — was the fin designer, Bob Evans. We arranged the return and repair to coincide with a weekend and minimize my time out of the pool. Swimming without my fins apparently didn’t occur to me. I joked with Bob that I wanted to keep these fins going as long as I could keep swimming, which I hoped might be another 20 years. I silently patted myself on the back for saving the cost of a new pair. In the 90s the fins had cost about $75, now they sold for an additional $100. The repair cost $30 plus shipping.

Back in the pool with my repaired fins, I marveled at how fortunate I was to have taken Claudia’s advice. Faintly and to myself I had cursed Claudia for coercing me to make the purchase, marveling that she held such power to override my usual frugality and preference for equipment-free swimming. I must have had more interest in improving my work-out than I confessed to.

Wherever you are, Claudia, all is forgiven. Maybe even a thank you is due.

Then maybe six months ago, a fin began to split where the ankle cover meets the base (left photo below). I tried sealing the crack with superglue to no avail. The fins are very sturdy so the split progressed slowly. Still, the cracked fin hurt; the force of the water twisted the fin into the sole of my foot. I faced the reality the owner of an old car faces: replacement is the only option. 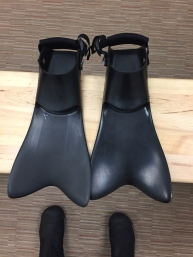 I called Bob back to order a new pair. Fortunately, I did not get him so he could not lsay “I told you so.” In fact, he had not urged me to replace the fins at the time I made the repair. The fins are manufactured in Pennsylvania, I learned, and I’d have to place my order online. My original fins were a dark, matte blue. When the new fins arrived they were black — very black and very shinny. I was shocked. How could I have ordered black, and how could I ever wear what I’d received?

I sent word of my disappointment. They sent a copy of my online order. I’d checked black as the color. For a couple of weeks I debated whether to waste the postage times 2 or suck it up and use the new fins. The shine disappeared in the first swim, and now I love the black. 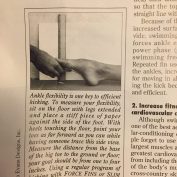 From the 1990s literature 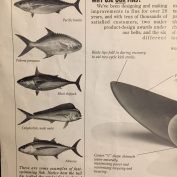 Here’s why my swim fins get an award. My kick is even; my ankles flex; I stay on the surface of the water; I swivel along a central axis imitating a torpedo. But with the fins and likely because of them, each of those attributes is heightened. (See Slim Fin literature in bubbles from 1990s.) I get more power out of my kick even when using the fins upside down as in the back stroke because the extra load from the increased surface area of the fins. They force my ankles to extend. They help keep me level. They demand more effort from my quadriceps, increasing the cardiovascular workout I get.  And I swim a bit faster. Not that swimming is a race for me — I never swam competitively —  but completing my 3 times a week, 1 and almost 2/10s miles routine in 50 minutes is a plus.

I give an exemplary service award to my slim fins for their long contribution to my comfort and happiness while swimming. May we still be in the pool lapping together in 20 years.