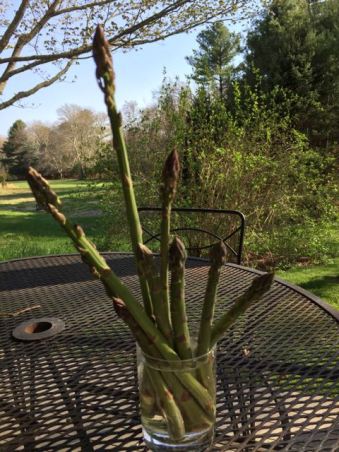 Lilacs in the dooryard 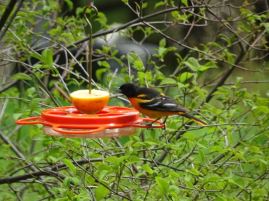 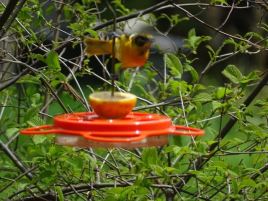 Female (out of focus) Baltimore Oriole

April 3rd: A male Eastern Bluebird sat atop a bird nesting box in the meadow causing my heart to skip a beat especially since I knew that a House Sparrow had begun to build a nest in the box. Would that I could speak Bluebird to let him know that I’d do everything I could to keep the House Sparrows at bay. Just before the Bluebird arrived, I had been debating which of the several practices I have tried in the past to follow this year to make the House Sparrow feel unwelcome or, better yet, to go elsewhere far away. Given my success rate, the Bluebird might well have decided not to accept any offer of protection from me. After all for all my schemes, I still have a population of House Sparrows. This Bluebird sighting was therefore both a FOY (first of year) and a last of year. Indeed, he has not returned.

April 15: A male Wild Turkey nibbled insects in the herb garden and the adjacent lawn. I have not seen Turkeys again since then but, unlike the Bluebird, I know he and his relatives will be around into the fall.

April 16: A ground hog munched on the grass in front of the back house. I watched hoping to see whether he would lead me to his burrow. Something finally spooked him, and he dashed in the direction of the canoe, where he has resided in past seasons. Time to review my neighbor, Marilyn’s, trap setting technique. I’d like this to be among the last-of-year sightings but, like warding off House Sparrows, that could be a pipe dream.

May 2: I harvested the first asparagus stems. Every dinner for the next 6 weeks will include asparagus. Towards the end of the season, the mailman may find offerings of the veggie in the mail box. A friend reminded me I could drop off extra stalks at the Welcome House or the Jonnycake kitchen.

May 2: The Sugar Maple beside the porch leafed out. I submit a blurry photograph as proof. The wind was blowing — that’s my excuse. The other Maples will be a week or so slower in leafing out. I should report the dates to the New England Leaf Out (NELO)  project.

May 3: A male Tiger Swallowtail sat on a branch of the wisteria bush. Don’t tell my native plant colleagues who argue that natives attract and support wildlife better than non natives. Two immature but native Lindera benzoin or northern spice bushes are growing out immediately next to the forsythia but they seem too twiggy to have hosted the Swallowtail caterpillar, although spice bushes are said to be the larval host. On May 3rd last year, I saw the first Monarch butterfly in the meadow fluttering near the ground as though it could not fly. It was, in fact, laying eggs. The Asclepias syriaca, common milkweed, is popping through the ground in the meadow. I hope the butterflies return in the coming days.

May 4: A pair of House Sparrows are the only birds to have completed a nest in a bird box. I removed 5 eggs. Tree Swallows are noisily starting a nest in a newly sited bird box — now in the middle of the meadow. They have used this box in its previous locations for years.

May 5: Other Rhode Islanders have reported the return of Baltimore Orioles so I hung my Oriole feeder with an orange and Concord grape jelly. Within a couple of hours, both a male and a female were feeding.

May 6: Lilacs first in the doooryard bloomed. Seven years after transplanting these Lilacs from the southern dooryard to the northern one, the plants have bloomed in abundance! The old stand never produced as many blooms; all the blossoms are white.

May 6: A male Hummingbird arrived at the feeder I put out yesterday!

On ticks: I removed what I think was a black-legged tick from my inner elbow about 2 weeks ago. The next day, I found a full grown dog tick climbing the porch door jamb. I found another dog tick (I hope) on the frame of the northern door to the living room. All three are taped to the fridge. A warm winter, and for my money more importantly a wet April, seems to have provided excellent growing conditions for these nasty pests.

On ants: The carpenter ants invaded the kitchen again at the beginning of April. But after a visit from Narragansett Pest and time. As of today (June 10), I don;t seem to have any more ants. The fruit flies have arrived at the compost bucket, however.

On rodents: The Grey Squirrel population is growing. The Red Squirrel appears to remain a bachelor and is as neurotic as ever. The Chipmunks were out in force starting in April. Mice have not been very willing to take the peanut butter from the basement traps. The groundhog (is he a rodent?) is looking very well fed although I have battened down the garden perimeter fence and Scott and I built a special fence around the raised bed with lettuces and other leafy greens.

The news here is all more than a month old but I’m posting it anyway since this blog is my way of record keeping.