There was work to be done. You can see my crack team! Despite the complex preparations, our task was only to replenish bee drink and to have a close up look at the bees in action. It was mid July. I was regularly feeding my new hives. Once suited up, we went out to the bee yard — really only two hives.

Busy as bees getting suited up

All ready for the field!

The muscle of the middle generation was most useful because the medium boxes were already almost too heavy with honey for me to lift, especially since my hives are elevated a couple feet above the ground. 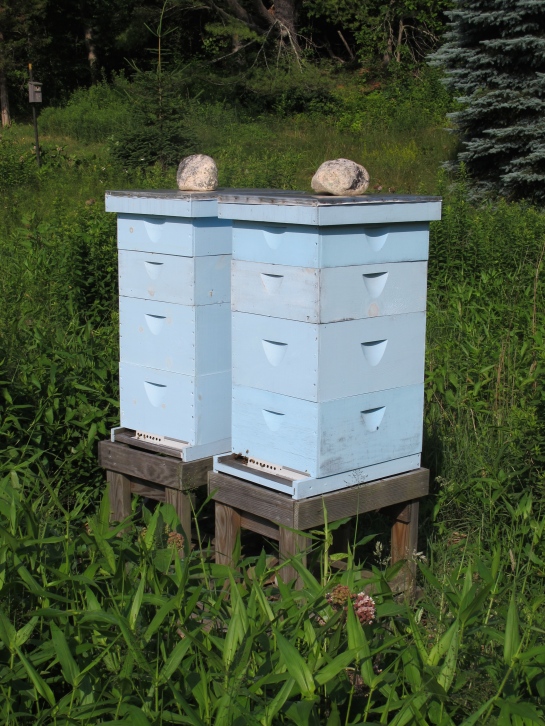 In case you’ve forgotten, both hives died in March. I think they went into the winter with clusters that were too small and with too little stored honey to make it through a severe winter. Perhaps I should have combined them. Both hives had been alive as late as February, however. Apparently they could not get to the fondant I put in the hives for them; it was still there when I cleaned the hives.

Our three generational team effort went well on that grey July day. We added bee tea to both hives. We had a good look at bees at all stages of development. We did not remove enough mediums to get into the brood box to look for the queen. No one got stung. My entomologist grandson would have liked to investigate more. Next summer I hope to have more work space around the hives to make that possible.

Both hives have continued to store up lots of honey. The weather, though dry until the last couple of days, has been excellent for continued foraging. The field is packed with many types of Goldenrod. New York and New England asters, sunflowers, boneset and white wood asters are blooming as well. The bees also love the wild arugula in the veggie garden. You can see how they are doing in the photo below. 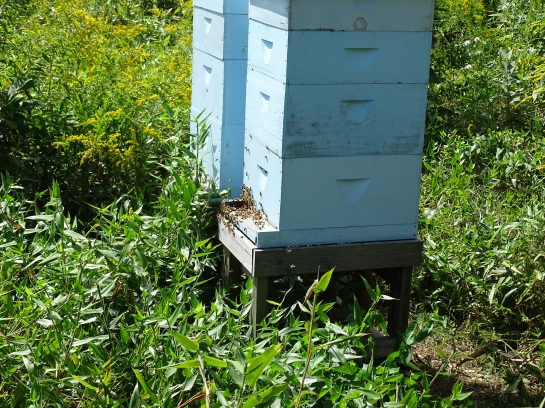 We did not see the queen when we opened the hives, so I can say that all the bees we saw that day about 13 weeks ago are dead now. The bee sisters, the workers, live between two and six weeks in the summer. The summer life expectancy of the bee brothers, the drones, is between four and six weeks. Compare that to the beekeepers team. We range in weeks of age from about 3,600 to 234. When we go back next year for another inspection, we won’t see a single bee we recognize.