Goodness! I barely had my bee keeper’s veil zipped on but I completely forget my art historian headdress.

Did you know that for $298.71, a very specific price I note, you can have a hand colored reproduction of Hans Memlings’ Adoration? A web search for images reminds me that the iconography of the Magi begins in earnest in the 15th century in the North and is everywhere in Europe from the Renaissance until the 18th century.

Here are a few images captured from the web. Botticelli, Perugino, Gentile da Fabriano, Corregio, and Murrilo are a few other artists that painted the Magi and whose paintings are reproduced on the web.

Albrecht Durer, Adoration of the Magi

The rain petered out briefly just as I came in from swimming. I jumped into my bee suit, grabbed the fondant from the fridge and the hive tool from the mud room. Imprudently, I decided to skip the smoker. It looked as though it might rain again any minute and more extreme cold weather is predicted for the coming days. I had already missed the chance to feed the hives in the mid December heat wave. This task is overdue.

Dead bees littered he landing areas of both hives. I lifted the rock that holds the outer cover of the smaller hive against extreme wind and improbable bears and pried up the inner cover. Bees were moving around on the frames. Eureka! They had made it through the recent bouts of cold. Ouch! One stung my ungloved hand as I began adding the fondant. The bees were alarmed by the opening of the hive.

I had only slightly zipped up my costume and had not put on my gloves possibly as a psychological hedge against the disappointment of finding a dead hive. But the bees, knowing they were live and well, wanted no part of this intrusion. Promptly they were on the war path. At least one seemed to be inside my bonnet before I could get it closed up. Another was walking down my leg into my boot.

Ladies, relax! I come bearing gifts. Isn’t fondant the modern equivalent of frankincense and myrrh? It is, after all, a resin of sugar and water. Perhaps they surmised that, despite my elaborate costume, I was no wise man, having come sloppily dressed and without a smoker. Maybe they have enough honey and don’t need the fondant. Or maybe bees don’t know this Christian tradition of gift bearing on 6 January.

I quickly closed that hive — its the one Carl brought down from the Spruce tree after it swarmed this summer — and moved as swiftly as a bee keeper should to open the larger hive. It too was buzzing with bees. I quite literally threw the fondant into the hive and beat a hasty retreat.

In the safety of the porch, I turned my bee suit inside out and gave it several vigorous shakes. A bee was buzzing somewhere close to me but I could not find her. Once upstairs, she staggered out of my fleece jacket and flew into the window. She’s in bee heaven now and in the accompanying photo. 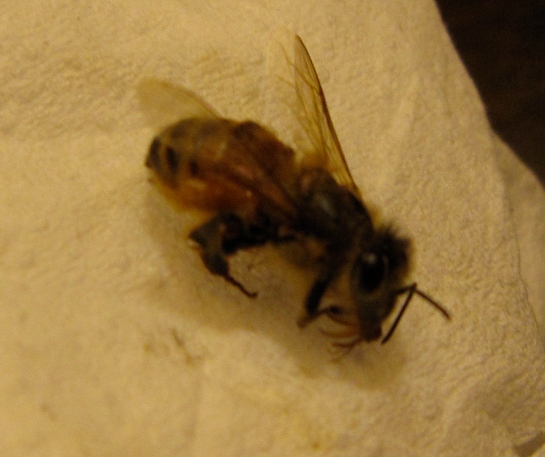 At least 2 bees died in this caper — the one who stung me and the one I killed. But the hives seem to be doing all right. The coming months are the trickiest. Until the bees can forage for food, it’s my job to keep them fed. I’ll check them again around Martin Luther King Day. I hope we won’t have a civil rights type confrontation then.