With the temperature in the 50s on the afternoon I returned from Belize via Boston, it would have been an OK time to remove the cover to check for bee life. But the hives were already in the shade of the evergreen hedgerow. I put a juice glass between my ear and the side of the hive. Definite buzzing in both hives.

Now that’s again cold — we even had a dusting of snow the first morning I was back — I can’t provide any sustenance until it warms up. We’ve had half a month of lion. I’m more than ready for the proverbial lamb portion. 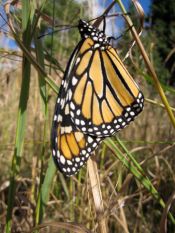 Some insect population is always a wings’ thickness away from annihilation. The Times reported a couple of days ago on the severe loss of habitat for the Monarch butterfly. Where’s Monsanto in this tale? Front and center, as you might imagine. But habitat destruction, drought and abnormally high temperatures also play a role. It seems the forest the butterflies use in Mexico to rest before turning around to migrate north has been reduced to 2.94 acres, just a bit bigger than my meadow!

My Monarchs made a very long season out of 2012. I thought they might have had a plan to skip the migration last year. The photo is from October 22.

What does the coming season hold for the bees and the butterflies?

All the headlines measured in units of 1,200 or 598 years remind me of my years as an art historian when the 9th or the 12th century occupied my 20th century student life. All the red hats and white robes bring images by Michelangelo, Velasquez, El Greco to mind. What is it about religious leaders …