“Susan,” Carl said, “has Dodder,” giving the word a spit. Lisa, for whom this was news, helpfully said, “Maybe it will go away next year.”

Dodder or Cuscuta is a parasitic plant in the morning glory family. The genus becomes rare in cool temperate climates. So climate change has brought me a rare parasite! If Lisa is right and we get a normal winter, maybe Dodder will not return next year.

But for this year, it has sprung into attack mode with Joe-Pye weed and goldenrod as its victims. On the first day of summer, when Carl identified the plant, its leafless orange stem (it has very little chlorophyll) had entwined only a few flower stalks. 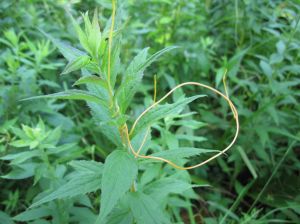 Dodder on 1 July before taking off

It went from a tentative presence to attack mode, enfolding several patches of plants the lower marshy area of the meadow. And flowered.

Dodder with its creamy colored flowers and orange stems

That exchange between Carl and Lisa was enough to make Dodder removal Nic’s meadow assignment. By the time he went home that day in late July, he had filled 2 contractor’s bag’s with Dodder. By the time he finished removing all the Dodder, he had abandoned the bagging and created a mountain of Dodder that I’ll burn later in the season.

Dodder seeds are minute and produced in large quantities. A hard coating allows seeds to survive in the soil for 5–10 years or more. While the Dodder is in flower, it does not seem to have set seeds yet. Given the certainty that Dodder is something unwanted, Nic and I decided he would remove all the flower stalks with Dodder. 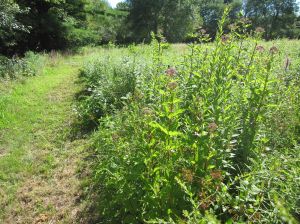 Another area cleared of Dodder