All I planned to do was clean up the bee hives. But four hours later having moved on to meadow clipping, I was startled to hear Bluebirds calling, Bluebirds fighting to be exact. Two males kept flying into each other, their wings whacking, while a female looked on. From time to time, a male would land on one of my Bluebird boxes. Then they’d fight again.

“I have three boxes,” I called out, “you needn’t squabble.” But there was only one female. The fight was over her not the boxes. 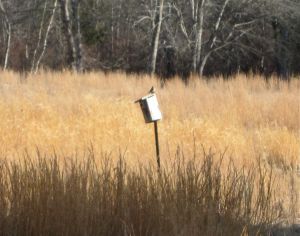 Meanwhile the Red-bellied woodpecker was picking away for the third day at a nest its making in the old Norway maple. In between pecks, it examined the perfectly round hole it has made and screeched with satisfaction.

Even a slow circling flyby on the part of the Red-tailed hawk could not deter the mating and nesting.

(You have to take my word for all this bird activity. My camera battery was dying and the birds are too small and distant for my point-and-shoot. I wished for the camera and their operators from the Panama birding team!)

The bad news, beside the dead bees, is that lots of Bittersweet stems still have life in them. But maybe an equal number of stems snap when touched and roots shed their orange sheaths when pulled from the ground.

My scratched wrists attest to the successful overwintering of lots of Dewberry. Its red stems are easily visible in the brown debris of last year’s foliage. I snipped 3 wheelbarrow’s worth of its prickly branches in the area to the south of the bee hives. While it grows together with the Bittersweet in that sunny, dry and sandy part of the meadow, I found almost no Dewberry when I moved to the south west corner of the meadow where its shady in the morning and again by mid afternoon and the soil is loamier and retains more moisture. Maybe that’s another piece of good spring news.