The second day of the Cornell Ornithology Lab’s GBBC and again my feeders are nearly birdless. I will report a Downy woodpeckers, a male Cardinal, a female American Goldfinch, a Rock dove and a couple Black-capped chickadees from 15 minutes of watching around noon. I heard a Red-winged blackbird but did not see it. That’s a highly abbreviated list of who’s out there.

Needing to measure something, I put a tape alongside the feeder shadow at solar noon. The shadow is about 27 inches. T 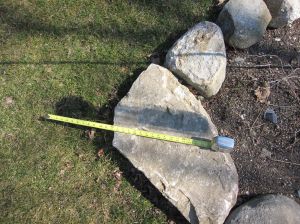 he last time I measured the shadow of the feeder, in late December, it was about 33 inches if I remember correctly. I seem not to have made a note in my garden book. Today sun is 12 degrees higher in the sky, .771 km x 10 to the 6th closer, and the day is an hour and a half longer than it was on 21 December.

Another report: I caught a vole beside the old front door.

The GBBC will not take those statistics. Hope I get some birds at the feeders before the GBBC closes Monday.